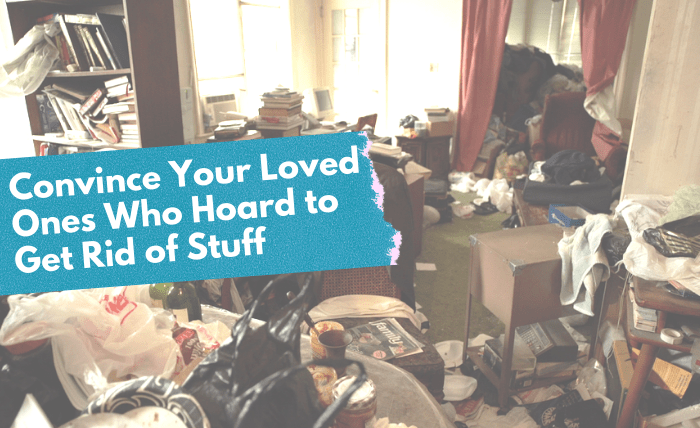 Sometimes a deep cleaning can help reinvigorate a home. It feels great to downsize, and reorganize the home for a fresh start.

However, people with the condition known as hoarding disorder do not enjoy the same revitalizing feeling from clutter cleaning  and organizing as the average person.

Instead, the feelings of extreme anxiety at the thought of discarding anything known as disposophobia can often hold hoarders back from being able to let go of their belongings.

Hoarders will display an intense resistance to throwing things away, even when they are completely unusable, broken, or soiled.

It can be especially difficult to allow a friend or family member to exhibit hoarding behavior out of concern for their wellbeing.

Why Do People Hoard?​

How to Convince a Hoarder to Get Rid of Their Stuffa

When to Ask for Professional Help​

Decluttering and organizing can help get them back on track, but hoarding requires more than a short term solution no matter how much relief it might bring you in the moment.

Although there might be a strong inclination to take control and throw everything away on their behalf, it is important to get their involvement in decision making for every item you sort through.

Knowing how to convince your loved ones who hoard to get rid of stuff is an essential part of every hoarding cleanup, not just for the immediate satisfaction of the initial cleanup, but to instill healthy habits and prevent more  hoarding in the future.

It’s not always the quickest way, or the easiest way, but it is the most ethical and healthy way to help a hoarder clean.

Learning about hoarding disorder and how it affects people is the first step in developing a plan of action to help hoarders get organized in any situation.

With a little patience, and a lot of understanding, you can help your loved one recover from hoarding and reclaim their life from clutter.

Why Do People Hoard?

Approximately 1 in 50 Americans are reported to be affected by hoarding every year, but experts say the estimates might be closer to 1 in 20 when considering cases that may have not been reported at all.

There are many reasons as to why people hoard, but the main factors that contribute are anxiety, depression, and trauma.

From the outside looking in, it is easy to assume that the clutter is a result of a lack of desire to be neat and tidy, however the psychology of hoarding is much more complex than that.

The extreme attachment that hoarders feel to their personal belongings is often linked to mental illnesses like OCD, PTSD, Dementia and Schizophrenia.

In fact, an estimated 1 in 4 people who suffer from OCD have experienced hoarding symptoms on some level.

Extreme forms of anxiety and depression such as Diogenes Syndrome can also result in hoarding behavior.

When looking at hoarding disorder in that light, it becomes clear that hoarding is a psychological issue that requires special treatment, and is not just the result of a pack rat with too much stuff that needs to get organized.

Some hoarders might find the act of acquiring new items to be thrilling, while others might see a value in things that most people do not.

The uncontrollable urges to compulsively collect that a hoarder experiences might stem from a deep fear of not having something when it will be needed, or out of a perceived need to stockpile for future survival.

Genetic risk factors can account for up to 50% of hoarding cases, with adults being the most susceptible to the disorder.

In fact, adults between 55 and 94 years of age have a three times higher likelihood of struggling with hearing than younger adults between 34 and 44.

Knowing the signs of hoarding can help identify the problem before it gets out of hand.  If left untreated, the collecting is likely to continue beyond that which could be considered healthy or safe.

Many of the justifications that hoarders will use can be implemented by healthy people every day in order to hold on to their belongings.

Talking ourselves into keeping something halfway through a clutter cleanup is easy. Digging up old items that have been long forgotten can spark old memories and joy.

However, these fleeting feelings will become overshadowed by the clutter that is impeding your ability to enjoy a neat, well organized home.

For most people, this will normally be enough to let go, but these types of decisions can cause hoarders extreme distress.

Understanding the root of their struggles is the best way to help hoarders get rid of stuff, and help them develop the skills to avoid more hoarding down the road.

Our desire to not waste, or fears of missing out on fond memories might cause us to feel some distress at the thought of discarding our belongings.

A healthy person will be able to rationalize and overcome this anxiety, but the stress that disposophobia causes hoarders to feel can be extreme.

Although the desire to make use of something we purchased might come with good intentions, when holding on to our belongings causes our homes to be inaccessible or unusable, the kept items start to do more harm than good.

Unfortunately, hoarding is a much more serious problem than a simple unsightly mess.

The behaviors can pose serious risks to the hoarder’s physical and mental health. Below are some of the dangers that your loved ones might be facing should their hoarding become severe.

How to Convince a Hoarder to Get Rid of Their Stuff

Understanding the causes and risks of hoarding are an important part of helping your loved one appreciate the gravity of the situation, and can be of great assistance when trying to persuade them to let go of the belongings that are negatively impacting their life.

However, patience is another big requirement. Below are tips that our hoarding cleaning professionals developed to involve hoarders in the decision making process, and encourage them to make better choices.

Remember, consent is key. Getting your loved one’s permission on every item you discard is not just the right thing to do, but it will help them learn how to control their compulsive collecting to avoid repeating their hoarding behavior.

If the excessive clutter that a hoarder accumulates seems like it might be too overwhelming for just you to clean up, it’s okay to bring in a professional.

In fact, professional help from the experts can be the best way to turn a hoarding situation into a healthy one, especially on a time crunch.

Below are a few examples of how a hoarding cleaning professional can help you.

When to Ask for Professional Help

The benefits of bringing in a professional are clear, but knowing when to bring them in can help you make the best informed decision possible.

Here, we have listed circumstances in which getting professional help might be your best option.

Such conditions can result in falling hazards, defective plumbing or electricity, and structural damage like warped foundations, cracked walls, or sagging ceilings. These conditions can lead to unfortunate accidents.

A professional hoarding cleaning service can help you to organize quickly, clearing the home of dangerous clutter and salvage it if possible.

Once this happens, code enforcement, landlords, and  other authorities can get involved.

Getting professional help can reduce the time it takes to bring the home back into compliance, before your loved one runs into trouble with expensive fines, or loses their home.

Someone who is professionally trained to deal with hoarding disorder will have a better chance of making your loved one feel comfortable in order to encourage their cooperation, making the tough decisions easier, and the process less distressing for everyone.

If the mental illness is severe, it might be time to consider calling in a mental health expert as well.

Having a clean, clutter-free home is important for a variety of reasons. To the average person, this might be a given, someone with hoarding disorder will need extra help letting go of their things to achieve this goal.

Knowing how to convince your loved one to get rid of the stuff that they are hoarding will make cleanup easier, and it is the best way to ensure they develop healthy habits to prevent more hoarding issues later in life.

With a little patience and understanding, you can help your loved one get back on track.

Professional help is always available if you need it, so don’t be afraid to make the call.

What To Do if Someone You Love is Struggling with Hoarding

Hoarders Cleanup: What’s the Best Way to Help a Hoarder?

Hoarder House Cleaning: How To Get Started

What Are the Signs of Compulsive Hoarding?

Is Hoarding a Form of Obsessive Compulsive Disorder?